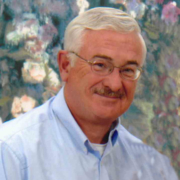 Bill was born in on October 22, 1949 to Bethon and Ruth Ferguson in Oelwein, IA.  He lived in Monroe, IA for most of his youth and enjoyed fishing, hunting, trapping, and playing sports.  He graduated from Monroe High School in 1967.  After completing his Associate’s Degree at Marshalltown Community College, he volunteered to serve in the United States Army.  He served in Vietnam during the war from 1969-1971 as a proud member of the First Infantry Division.  Shortly after he returned from military service, he met Linda “Lin” Slack.  They were married on June 26, 1971. After working at the VA hospital in Des Moines, IA, he and Lin moved to Waterloo, IA in August of 1972 so he could finish his collegiate studies at the University of Northern Iowa (UNI).  They were blessed with the birth of their daughter, Marta, in 1973.  Bill earned his Bachelor’s Degree in marketing from UNI in 1974.  After graduation, he worked for Hawkeye Steel for one year, moving between Peoria, IL and Springfield, MO.  In January 1975, he began his career with John Deere in Waterloo, IA, which would last over 30 years.  He and Lin welcomed their son, Matthew, in 1976.  His career with John Deere included assignments at numerous locations including the Tractor Works, Seeding Division, and Harvester Group as well as at the corporate office of Deere and Company.  His career led him and his family to move to Davenport, IA in 1982.  Bill and Lin lived in Davenport until moving to the Omaha, NE area in 2009.

He loved his family above all else, putting their needs before his own.  Lin was his best friend and partner in life for 48 years.  One of their favorite things to do was to take long walks and to appreciate nature together.  They shared a love for their children, their grandchildren, and dogs.  His love and pride for his children and grandchildren was unwavering.

He was an avid fisherman who loved to collect old fishing tackle.  He was notorious for buying and selling stuff he collected at garage sales.  He always on the lookout for new places and new ways to catch crappies and bass.  Later in life, he took up fly tying as a hobby and delighted in catching trout and smallmouth bass on flies he’d created himself.  He loved to teach others how to fish, how to tie flies, and how to garden.  He never hesitated to help someone in need, often going the extra mile to lend a helping hand.  Bringing a smile to someone’s face or making them laugh was something he delighted in doing.