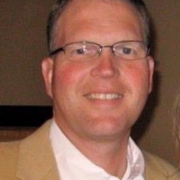 Timothy D. Tegels, died on Sunday, October 6, 2019, at the Josie Harper Hospice House in Omaha, NE.
A son of Joseph M. Tegels and Anita Mae (Wittry) Tegels, he was born on February 10, 1965. He grew up in Carroll, Iowa and graduated from Kuemper Catholic in 1983. Following high school, he attended the University of Northern Iowa, and graduated in 1988. During his high school years many would remember him playing baseball and singing in musicals and in the choir. He had a beautiful voice and sang in over 100 weddings. His love for music continued while he was in college and sang in the Men’s Glee Club and traveled all over Europe twice. His favorite country was Austria. Most recently Tim worked at Prime Communication, Inc. in Elkhorn, NE as Procurement Manager.
For twelve years, Tim confronted and battled cancer with courage, humor, determination, FAITH and TRUST in God. He was immensely encouraged by the love of his family, friends and those he had yet to meet. Your kind, loving messages always lifted his spirits. Many of his doctors said he was a miracle with all he had overcome. Tim would prefer his life to be celebrated instead of his passing be mourned, but that doesn’t mean we shouldn’t cry. Crying is a part of life. However, laughter was always a staple to Tim. His sense of humor was blessed by all who knew him. The family asks for prayers and thoughts for Tim’s loved ones. He was a friend to many, but a best friend to his wife, Jill and son, Max, who stayed by his side providing him an abundance of strength throughout his journey.
Tim was blessed with many friends and they would come to his “man cave” to watch all types of sports or listen to music and drink a few beers. He was extremely social and loved to be around people. He was a lover of gadgets / tools and kept everything extremely tidy! He was a coach on various baseball and football teams his son, Max, participated in during his youth. Golf was a passion of his and played every chance he could. He was also a master of “useless information” and everyone would want him to be on their trivia team. Tim was involved in the Knights of Columbus Fraternal Order and volunteered as much as his health would allow. His summer weekends were spent at Lake Okoboji where he enjoyed boating and golfing with his family and friends. His favorite vacation was in Maui, Hawaii, but also thoroughly enjoyed going to the Masters Golf Tournament for his 50th birthday. Tim had two bucket list items he was unable to complete due to his failing health, and that was playing golf at Pebble Beach and having a cold Guinness Beer in Ireland, but Jill will make sure these are both accomplished by her and Max. Tim always made sure Jill and Max were happy. They were always his number one priority in life!
Tim is survived by his wife; Jill (Tiefenthaler) Tegels, son; Max Tegels, Gretna, NE
mother; Anita Mae Tegels, Carroll, IA, sisters; LuAnn Vanderheiden (Randy), Glidden, IA, Karen Wood (Bob), Fort Dodge, IA, brothers; Bob Tegels (Cathi), St Louis, MO,
Dick Tegels, Carroll, IA, Ken Tegels (Kathy), Atlantic, IA and Jerry Tegels (Shelley), Ankeny, IA, many nieces, nephews, cousins and friends. Tim was preceded in death by his father, Joseph M. Tegels.
Visitation: 5:00 PM to 7:00 PM with Vigil service at 7:00 PM, Thursday, October 10th St. Patrick Catholic Church, 508 Angus Street, Gretna, NE.
Mass of Christian Burial: 10:30 AM, Friday, October 11th also at the church with the Revs. Father Gregory Baxter, Father Rich Adam and Father Lawrence McCarty to concelebrate the service.
Private Family Interment will take place at St. Francis Cemetery, Maple River, Iowa at a later date.
Memorials can be directed to:
Nebraska Cancer Specialists (NSC) Hope Foundation or Max Tegels Education Fund (Checks can be made out to: Max Tegels and mailed to First National Bank of Omaha, 8311 S. 167th Street, Omaha, NE 68136)
Family and Close Friends are invited to Celebrate the Life of Tim Tegels on Friday, October 11th, from 2:00 PM – 5:00 PM
Please dress casual, as the location is in a barn Tim selected. Please park your cars on the west side parking lot of Union Bank and Trust Sports Complex (UBT) in Elkhorn, NE and a shuttle van will take you approximately one mile to the barn. The address to park is 21015 Cumberland Drive, Elkhorn, NE 68022. Look for signs. No parking is allowed at the private barn.
Tim’s family would like to express much appreciation to all the doctors and nurses at the following centers and hospitals, for their wisdom, support and comfort all these years during our journey. Nebraska Cancer Specialists, Urology Cancer Center, CHI Hospitals, Methodist Hospital and VNA Hospice Care. We are forever grateful. Tim was very special to many people and he will be in our hearts forever!