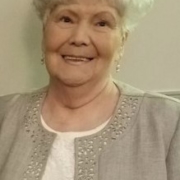 Virginia L. (Flynn) Fidler, 77, of Gretna, died peacefully at her home Oct 1, 2021. She was born Feb 2, 1944 in Torrance, CA, the youngest daughter of Gerald and Ethel (Holaway) Flynn. Virginia spent her childhood in Grant, Nebraska and graduated in the high school class of 1962. She then went to Lincoln’s Cosmetology School. Hairdressing was a profession she was passionate about and practiced in Lincoln, NE, Boulder CO, Grant and Benkelman, NE. She was known for always having her hair and appearance look neat and classy!

Virginia married her high school sweetheart and best friend, Keith Fidler on November 28, 1965 in Grant, NE. On January 6, 1973 they were blessed with their daughter and only child, Tiffany. After Virginia’s hair dressing career, Keith and she managed and truly enjoyed retail businesses in Benkelman, Ogallala and Sidney, NE. During these years, Virginia spent many hours helping to plan and organize Keith’s vision for boys and girls summer basketball camps, spurred on by Tiffany’s love of sports. The 16 year-long Great Plains Basketball camps were a huge success and are remembered even today by the kids and cordial townspeople and volunteers in the towns of Benkelman, Grant and Imperial who helped host the camps.

In 2003, Virginia and Keith moved to Omaha, then Elkhorn, NE to be closer to their daughter and grandchildren and were able to attend their many schools, church and sporting events. Virginia was a very dedicated, loving and proud “Naunny” and filled her home with laughter and fun plus good cooking! She always made note of the “little things” the grandchildren would say and do, so Tiffany could treasure them forever.

Virginia was preceded in death by her husband; Keith Fidler, her parents; Gerald and Ethel Flynn, grandparents and many aunts and uncles. She is survived by her daughter; Tiffany (Troy) Appuhn, five grandchildren Taylor, twins, Lindsay and Lauren, Jocelyn and Hunter. Sisters; Frances (Dick) Olson, Connie (Gene) Olson, Lincoln, brothers-in-law; Mike Fidler, McCook, NE and Chris Fidler, Imperial, NE and many nieces and one nephew.

In lieu of flowers, memorials can be sent in her honor to the Nebraska Humane Society in Virginia’s name.