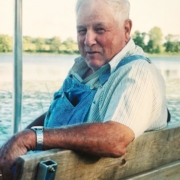 Dad was quick to start a conversation with anyone he encountered.  Whether sitting in the Sid Dillon waiting room while he got his pride and joy vehicle serviced, or getting his paper and quick pick 5 at the local “short stop”.  He loved driving his pickup down to the 80 or the shop to visit with whomever was around that day.

Mom and Dad raised our family on a farm northeast of Gretna.  This was a fully operational farm with cattle, hogs, chickens and 6 children to help run it. There were meticulously planted crops, a large garden, and hay to put up. And one lone apple tree. Even after moving to a beautiful new home west of Gretna, Dad continued to farm the original home place. After a day of field work, he could be found under that apple tree having a cold beer from his small cooler. He loved that place and farming was his passion.

Every Sunday morning, the family would dress up and head off to St. Pat’s for mass.  People would tell dad how well behaved we were—unknown to them his eye contact kept us that way.  We had numerous meals at Rose’s Lodge and would catch a movie at the Admiral Theater.

We were often “forced” to road-hunt pheasants, with Mom driving and us children strategically placed for observing any pheasant activity. When Dad alerted, he could shoot from his ‘shotgun’ position.

Dad could often be found at the Aksarben horse races, Las Vegas for the Super Bowl—as he was an avid NFL football and college football fan and known to bet against Nebraska every time.

Tom’s compassion wasn’t always apparent. But his kindness showed one morning outside a hotel where we had spent the night.  Dad was observed speaking to a man who was next to a beat-up old station wagon and worn tires, pregnant wife and 3 small children.  Dad was quietly saying, “You know, that restaurant next door has some really good pancakes”, extending his hand with some cash.  The man quietly took it, thanking dad, and I watched the family walk over for their breakfast.

Every summer, beginning as a boy, Dad would spend summers in Minnesota. Soon, he would be piling his own large family into an Oldsmobile fitted with new tires, no seat belts or air conditioning with sweet corn tucked under Mom’s feet. There were times Grandpa Hurst would be wedged in between all his grandkids and off we would go for a couple weeks. “Mothers Lake”, as he called it, was a favorite spot.  You could rent a boat from “Mother” as she was called, for the day. Dad so enjoyed fishing at this lake that when a house came up for sale some 20 years ago, he bought it, and this became the place to be during the summer. Dad tried to tell all of us how to fish for years—explaining his way was the best. “Put the line on the bottom and two turns up. You aren’t going to catch anything if you don’t leave your line in the water, just let her sit.” And he didn’t stop there, as his expertise was also explained to his grandchildren. This was always met with compliance and eye rolls. While bobbing his line up and down, sucking on a tootsie roll pop, he’d occasionally glance over and say, “I think you got a bite”.

I won’t elaborate on the last couple years of Dad’s life because that was not the man he was. For 67 years Mom and Dad were dedicated to each other through much thick and much thin. Mom had taken care of Dad all these years, and his main concern in life was knowing she wasn’t far from his side.

Let’s suffice it to say that we were fortunate to care for Dad in his own home, especially these last trying months. He was surrounded by a family he loved, was able to again get his garden planted and watch the menagerie of birds that visited the place.

Lastly, when someone mentions that we have that “Hurst temper”, without hesitation our answer is likely to be, “I sure do, but I will be the first one to buy you a beer.”