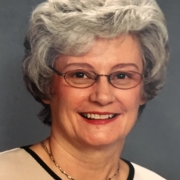 Carol began her life’s journey on December 22, 1942, in Omaha, NE.  She was baptized and confirmed in her home church – The Lutheran Church of our Redeemer.  There she attended and helped with Sunday school, vacation bible school, youth group, and sang in the choir.

Carol graduated from North High School in 1960, and then earned a Bachelor of Science degree from the University of Nebraska at Omaha in 1964.  She began her English teaching career in Shenandoah, Iowa.  It was there that she met and married an ambitious young coach named, Dick Kennedy, who took her on quite an extensive, never-ending journey during their life together.

The newly-wed couple moved from Savannah, MO, to further Dick’s career and begin their family with a son – Richard Allen.  Carol also taught English and yearbook class one year while in Missouri.  After a busy two years, they moved to Palmer, NE, for five years where Dick became a high school principal and they welcomed two more children to the family – Michael Patrick in 1971, and Katherine Ann in 1974.  The next moves were to Geneva and Waverly, Nebraska where Carol was busy being a mother, involved with church activities, trained as a volunteer EMT, and once all the children were in school found time to substitute teach.

The final school move in 1983 was to Franklin, NE, where Dick became a school superintendent.  Carol next began a full time career teaching English and Journalism at Red Cloud High School for twelve years – a very fulfilling and extremely busy time!  During that time the children grew up, graduated from high school and were on their way.

Upon retirement, Carol and Dick built a home in Gretna, NE and moved to be closer to both families.  After moving in Dick finished the basement and Carol loved spending time working in her flowerbeds full of numerous, colorful blooms.  In her spare time she enjoyed reading, movies, exercise, and playing cards.  She also loved cooking and baking goodies for everyone.   They greatly enjoyed times spent with children and grandchildren in Missouri, Arizona and Nebraska.  They were also able to share many wonderful trips together including the Northeast state’s Fall colors, Niagara Falls, Hawaii, Alaska, Washington D.C. and many more wonderful places across the U.S. Carol is survived by her husband, Dick, sisters, Kathie and Karen, children Rich (Stacia), Mike (Vicky), Kathy and grandchildren Sam, Alex, Katelyn, Jacob, Ryan and Sophia.