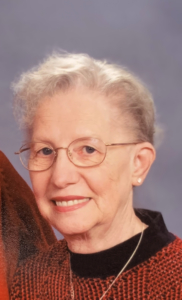 Shirley Lorine Tomlin was born March, 22, 1934 and passed away on September 20, 2019 at the age of 85. She grew up in Shenandoah, Iowa and moved to Omaha, Nebraska, where she attended Grace College of the Bible. She became an X-ray Technician and did missionary work in Ecuador. Later, she worked at Midlands Hospital in Papillion, Nebraska as a Nuclear Medicine Technician. She is survived by her husband of 53 years: Ronald R. Tomlin; her 2 children and their spouses: Troy and Claudia Tomlin, Marlo and Ken Olson, Jr.; her 5 grandchildren: Deric, Ariel, Teeya, Rachel, and Chase; her 1 great-grandchild: Meleah; her brother and his wife: Richard and Margaret Kier; as well as many nieces and nephews.