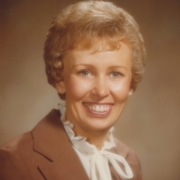 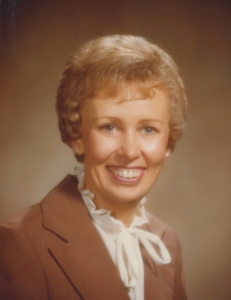 Elkhorn – Joyce Woodrow Stender Stepanek was born June 21, 1933. She grew up in the
Benson area of Omaha and graduated from Benson High School. Joyce was united in
marriage to Gerald Stepanek on May 17, 1952. They had two daughters: Barbara and
Carol.
Joyce (or Joey as many people knew her) raised her girls with love and

supported them whole heartedly in their activities. She worked part time as the church
secretary at Shepherd of the Hills Lutheran Church. When her girls were grown she
sold Mary Kay cosmetics and worked her way up to director. Joyce and Jerry loved to
travel, including cruises to Alaska and Hawaii, and many fishing trips. They were also
snowbirds, traveling to Texas every year to get away from the Nebraska winters. They
would go down in the fall, making sure to come home to celebrate Thanksgiving and
Christmas with family, and then back down to Texas until April. They began this
adventure with a motor home, and then ended up buying a park model down there.
When Jerry had heart issues they decided it was best to stay in Omaha full time again.
The decision was made to move to the independent living facility at Elk Ridge Village in
Elkhorn, NE and they were there for about 2 years before moving to the assisted living
side. When Joyce had a bad fall that broke her hip and shoulder, and was also showing
signs of dementia, she moved into the memory care wing at Elk Ridge. She had
another fall on June 28th and broke her other hip. She had surgery but was never able
to rally from it. She died peacefully on the morning of July 4th.
During her life she was very active in church as well as Daughters of the Nile,
Eastern Star and Rainbow Girls organizations. She enjoyed bowling, going to the lake,
square dancing, fishing, and playing cards with friends. She also loved hand work
projects like knitting, crochet, embroidery, and made many quilts and purses. She
always had some crafting project going.
Joyce was a kind and loving person who was appreciated and loved by many.
Her family were her most valuable people. She was always interested in each persons
life and she will be greatly missed.
She was preceded in death by her mother, Joyce Locher, as well as two
grandsons, Jonathan Nelson and Caleb Nelson. She is survived by her devoted
husband of 69 years, Gerald Stepanek; Daughters Barbara (Larry) Nelson and Carol
(Monte) Harder; grandchildren Alicia (Justin) Enquist, Peter (Ashlee) Nelson, Anna
Nelson (granddaughter-in-law), Anna (Evin) Lackore, Micah (Esther) Nelson, Luke
(Emily) Nelson, Josiah (Eliza) Nelson, Levi (Hosanna) Nelson, Grace Nelson and fiancé
Alim Musah, Mo Oltman, Nash (Hope) Oltman, Kendyl Oltman; and 27 great
grandchildren.