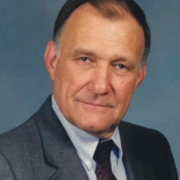 Jack was born on December 30, 1932 in Presho, South Dakota to Edwin and Vera (Walker) Nielsen.  Jack graduated from Omaha North High School in 1950 and received his BA in Business Admin. From University of Omaha in 1960.He was a claims adjuster for State Farm for 35 years retiring in 1995.  Jack enjoyed collecting and restoring Studebakers, and spending summers with the family at the cabin in Minnesota. Jack loved to read, travel and fix things (mostly his children’s autos).  He was known and appreciated by many for his stoicism, integrity and humor.  Jack’s humor could sometimes be silly but was usually bone dry, straight faced, sarcasm. He was a Master.