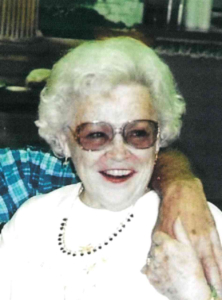 Donna Hagerman was born into a loving family on August 28, 1930 to Bill and June Hagerman. She was the oldest of 5 children. Her siblings are Ileene Nath (d. 2015), William “Bill” Hagerman (d. 2002), Betty Frances Nath, and Mary Sue Hyland. She met the love of her life, John H. Nelle, while she was pulling weeds outside her home. They were in high school and a few years later they married on June 11, 1950. They had 4 children: Connie “CJ” Roshak, Cathy Liebgold, John W. Nelle, and Roberta Pelo (d. 2012). Donna has 8 grandchildren and 16 great-grandchildren.

Donna was an avid bowler. She was on several leagues and was the president of the Omaha Women’s Bowling Association for a time. She also loved to watch sports on TV. Her favorites were tennis, bowling, Nebraska Cornhuskers, the Lakers, and the Kansas City Royals. When her children were young, she also enjoyed camping and boating. One time, while boating at DeSoto Bend, her husband, John, was teaching her how to water ski. When she fell, he said to her, “don’t go anywhere, I’ll be right back.” They had a very loving relationship and joked around with each other a lot.