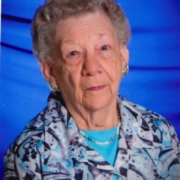 Donna Mae was born on May 1, 1926 in Creighton, Nebraska to Frederick and Oril (Benton) Milne she was the seventh of eight children.

She attended country school Dist. #23 through the 8th grade and graduated from Creighton High School in 1943.  Donna also attended Commercial Extension Business School in Omaha in 1944.

On November 25, 1948 in O’Neill, Nebraska she married Alfred Kenneth Foote of Genoa, Nebraska following a snow storm but that’s another story….  To this union two children were born; son, Gary in 1956 and daughter, Judy in 1958.  Judy was killed in a car/bicycle accident in 1968.

Donna worked for Insurance Companies in Omaha for many years retiring in 1988.  She enjoyed the many bus tours taken with her husband and spending time with her grandchildren.  She was a member of Trinity United Methodist Church since 1964.