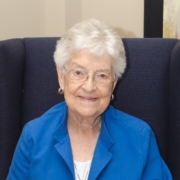 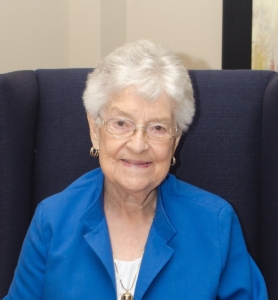 Delores Mae (Lind) Thorell was born on August 5, 1927 in Cedar County, north east of Wausa, Nebraska to William and Victoria Lind. She grew up on farms in the Wausa area with her sister, Wilma, and brothers Virgil, Loren and Gordon. She was baptized in Thabor Lutheran church on October 22, 1927 and was confirmed at Thabor on June 1, 1941.

Delores was a good student and went to country schools in the area and later boarded with families in Wausa so she could attend High School. She played clarinet in the band, played piano and sang in glee club and church choir.

Delores met her future husband, Floyd E, Thorell Jr. in Sunday school at Thabor. They married March 1, 1944 at her parents’ home and were married for over 64 years until his death August 29, 2008.    March 1945, toward the end of WWII, Floyd went to the Navy. During his service in the Navy, she learned to live on $90 a month while he got to keep $20 and she saved money to buy their first furniture. They were blessed with six children, two sons and four daughters. Delores was busy and energetic.  She taught herself to sew and later taught herself to drive so her children could take part in church and school activities. She enjoyed playing games and spending time with friends and family and served many meals to bring people together.

Delores was an active member of Thabor Lutheran Church in Wausa for 77 years and then moved to Omaha in 2004 and joined St. John’s Lutheran Church in Bennington. At both churches she was a member of the women’s groups and the quilting groups, At St. John’s she was active in Cooks 4 Christ.   She held many leadership and committee positions. Her faith kept her strong.   She was also an active member in the VFW Auxiliary in Wausa.

She made many embroidered dish towels and quilts for her family and for charities. Her quilt squares and stitches were filled with loving thoughts.  She especially enjoyed every grandchild and great grandchild and tried to take part in as much of their lives as she could.

Delores moved to Ridgewood Independent Living in March of 2014.  She was called home on June 4, 2021 at Ridgewood, Bennington, NE.

Delores was a blessing to her family, her church and her community. A life well lived.