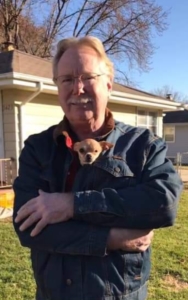 Daniel R. Terry was born in Nebraska City, Nebraska in 1955 joining sister, Linda, and brother, David.  After the family moved to Renton, Washington, another brother, Paul joined the crew.  Dan was timid and quiet, loving animals from a young age.

He worked odd jobs for awhile, then worked with his father in sewing machine sales and repair at Terrys Sales and Service for many years,  he later ran the business himself.  He had a gift for repair.

His dog, Myles, came into his life shortly after his father’s death and was a faithful friend for many years.  Dan had many friends who also loved dogs which were often the connecting points.  After Myles crossed the Rainbow Bridge, Mindy came to be with Dan.  She has been another faithful friend.  Dan’s lifelog friend was Duane Ash, who was always there for Dan, and vice-versa.  Being the kind, loving man that he was, Dan has many friends who will miss him deeply

Dan is preceded in death by his parents, Charles and Joyce Terry and brothers, David and Paul.

Dan will be sorely missed by many.

In Lieu of Flowers Memorials to Nebraska Humane Society.