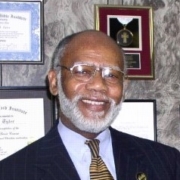 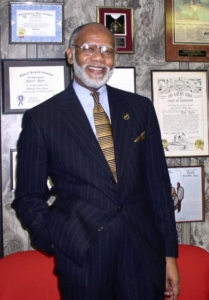 Bishop Robert D. Tyler, Pastor of Church of the Living God Temple 33 C.W.F.F. in Omaha, Nebraska, was promoted by God to Heaven on December 30, 2020 in Omaha, Nebraska from adverse effects of COVID-19. He was 84. He is preceded in death by his father and mother Samuel and Dissie Rogers Tyler; grandparents William and Mary Rodgers, Moses and Maria Tyler; his brothers Samuel, William, Paul, and his sister Ruth Tyler.
Bishop was born August 7, 1936 in Buffalo, New York and raised in Pittsburgh, Pennsylvania. He moved to Omaha in 1966. He was employed by two of the city’s most prestigious firms. He worked for Henningson, Durham and Richardson (HDR), an architectural and engineering firm for eleven years as a graphic designer. He was later employed by Northern Natural Gas (later InterNorth and subsequently Enron) for twelve years as Art Director for the Liquid Fuels Group.
Bishop received a Bachelor of Theology in May 1986 from the International Bible Institute and Seminary. He received several certificates in leadership and biblical studies from the same Institute. He also attended the Pittsburgh Art Institute.
The Bishop was called into the ministry in 1974 and ordained in 1977. He was assigned to pastor Church of the Living God Temple 35 in Topeka, Kansas from 1976-1982. He and his family, no matter the weather, made the journey every weekend to Topeka. He was called to pastor Temple 33 in 1981.
Bishop Tyler left the corporate world to pastor full-time in 1987. He was highly instrumental in the formation of the MAD DADS organization, a group that empowers men to become guardians of their own communities. For a period of time, Bishop Tyler was the chair of this organization. The internationally recognized group has been visited by at least sixteen countries, and he was acknowledged by two sitting presidents, Bill Clinton and George Bush, as co-founder of the organization. MAD DADS also received the prestigious Essence Award and received the 126th point of light award. Bishop Tyler became one of the country’s strongest and most knowledgeable experts on drugs and gang violence. Bishop understood the issues that produce aberrant behavior in our youth. His deep insight and keen awareness of the problems associated with drugs and “at risk youth” kept him in demand.
While pastoring Temple 33, Bishop was elevated to Overseer Church of the Living God C.W.F.F. in August 1990. He carried out the wishes of the District Bishop, visited District Churches, and assisted in the growth of local pastors. In August 1994, then Overseer Tyler, was elevated to Bishop. He directed efforts of Missions and Foreign Affairs and presided over the 12th District. In August 1998, Bishop Tyler advanced to Vice Chief Bishop. He was responsible for the National Agenda, presided over the Executive Board meetings, supported and coordinated the mission of the Chief Bishop. God moved Bishop Tyler rapidly through the ranks of the Church of the Living God. God was not finished at Vice Chief, he became the presiding Prelate, the Chief Bishop in March 2004. He served as Chief Bishop for eight years before returning as pastor of Temple 33.
Bishop married Carolyn James, a marriage that spanned sixty years. He is survived by his beloved wife Carolyn; his children Derrick Lynn, Terence Darnell (Lisa), Dhiadra Rae, Lloyd, Roberta, Robert (Anita), Marlon (Teila), and Todd Tyler; his grandchildren Avery Tyler, Amber (Noah) Strozier, Kaydon Robert Tyler-Jones, Collins Bennett, Andrea Hunt, Tiffany Harris, Sade LeBron, Brett, Dean, and Sydney Tyler, Johnathan Young, Jade, Brooke, and Jamelle Tyler, Elgin and Evan Foxworth, Blake and Grant Tyler; his eleven great grandchildren; and special friends Karen Frazier, Jermaine Fullman, and Robbie Summers.
In Bishop’s own words, “I was called out of the world and saved under the gospel of Jesus Christ as preached by Elder L.C. Nichols in Omaha, Nebraska in 1974. Until then I had avoided what I believed to be a prophetic pronouncement placed upon me by my grandmother at the age of four. The seeds of the gospel were sown and deeply embedded in my heart. However; it was thirty-four years later when they bore fruit. From that time to the present, I constantly pray and study seeking God’s divine guidance for the church.”