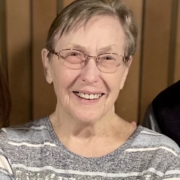 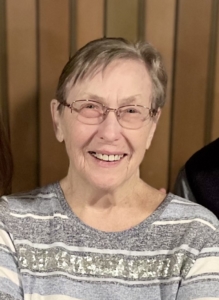 Funeral services will be Monday, January 17 at 10:30am with luncheon to follow at Lutheran Church of the Master, East Campus, 2617 S 114 St, Omaha. Burial at Bancroft, NE.

Bev was born November 30, 1937 to Hugo and Clara (Meyer) Dorau, in Rosalie, NE. She grew up on the farm and graduated high school from Rosalie in 1955. After high school graduation, Bev moved to Lincoln, NE, where she met Phil.

Shortly after their marriage, Phil and Bev moved to New York. They moved back to Nebraska and resided in Omaha. Bev stayed busy caring for their four children and supporting Phil with his insurance business. Bev loved to golf, bowl, needlework, and created many heirloom items for her family and friends. Bev and Phil hosted countless parties at their home with their family and friends.

Once Phil retired, they enjoyed being snowbirds and living in Las Vegas half the year. Bev and Phil loved to travel even taking their kids or grandkids along. They were able to see the many places all over the world.

She was preceded in death by her husband of 63 years, Phil Joerz; her parents, Hugo and Clara Dorau; sisters, Shirley Clem and Janice Kuhn; brother, Lyle Dorau and daughter-in-law, Toni Joerz.

Memorials may be directed to Lutheran Church of the Master

or the Josie Harper Hospice House.