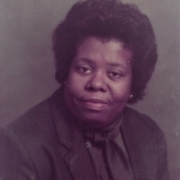 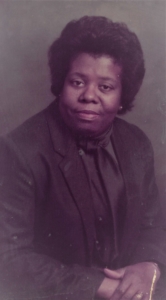 Annie Pearl Henderson was born October 12, 1934 to her mother Bernada Coleman and father Leroy Shepard in Brookhaven, Mississippi. Her mother later married Saul Coleman, to this union eight children were born. Annie married Walter L. Henderson and they later moved to Omaha Nebraska in the early 50’s; to this union there were five children.

Annie had a very strong work ethic, she worked at TipTop for 22 years; she then went to work for Fruhuff where she became a welder for many years. She went on to Zeneca where she retired after 20 years of service.  During her career she received many awards and certificates for her years of service.

Annie was a dedicated and faithful member of Greater New Hope Missionary Baptist Church for 47 years. During her time there she sang in the choir (Tenor section), a nurse for the Pastor, and President of the Culinary/Hospitality Ministry.

In Annie’s spare time she loved to cook and bake for her friends/family; she will be remembered for her famous chicken and rice, dressing, sweet potato pie, and 7-Up cake. She had a green thumb; you could often find her outdoors from early morning to mid-afternoon. Annie tended to tell it how it is. She loved her dogs Frisky, Sheeba & Killer…she also had a love for ceramic art, especially elephants.

Annie is preceded in death by her mother and father; Siblings; Saul, Charles, and Robert J. Coleman; Sisters; Katie Baker and Mary Shepherd; Her sons; Michael and Marshall Henderson.