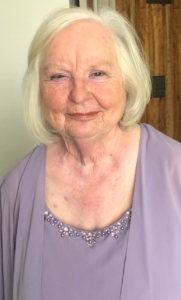 Ann Gredys McDonald, 82, passed away on February 14. Our beloved Ann was born March 29, 1938 in Omaha to Stanley Joseph and Katherine Ann Gredys. She was the oldest of nine children. Ann attended St. Adalberts Catholic grade school and Cathedral High School. It was on a staircase at Cathedral that she met her future husband Robert McDonald. It was love at first sight and the beginning of a sixty-six-year romance that would bring into this world six children and numerous grandchildren and great-grandchildren.

Ann was a wonderful mother and wife who dedicated herself to faith, family, and friends. She prided herself on creating a home where all were welcome to enjoy family dinners and celebrations. Ann was also committed to her 37-year career at Creighton University, where she served as executive assistant to the Chairman of the Journalism Department. In 1995 the university honored her with the St. Ignatius award, given to faculty and staff who embody the Ignatian principles of spirituality and service to others. According to Creighton’s Deglman Center for Ignatian Spirituality, “To know a recipient of the St. Ignatius Award is to have experienced something of St. Ignatius himself.” At Creighton Ann also formed several strong lifelong friendships. She especially valued the time she spent with her work study students. Outside of family and work she was a talented seamstress, avid gardener, patient fisherman, and exceptional bowler.

Ann will be missed greatly, but those who knew her know that she will be watching over them from heaven.  She was preceded in death by her parents, her baby sister Mary Alice, and her seventh child born unto heaven.

Ann is survived by her best friend and loving husband, Robert L. McDonald of Omaha; her children, Lynn and Steve Scheuermann of Michigan, Robert and Darla McDonald of Omaha, Susan and Jim Hawkins of Arizona, Michael and Tami McDonald of Florida, Elizabeth and Scott Wood of Omaha, and James and Carol McDonald of Illinois; twenty-two grandchildren; and eighteen great-grandchildren.  Ann also leaves behind seven brothers and sisters, their spouses, and a great many nieces and nephews.