Both at St. Wenceslaus Catholic Church 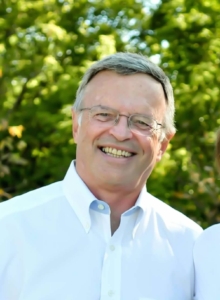 William “Bill” Peter Karpan was born on September 24, 1947 to Pete and Kay Karpan in Albia, Iowa. He attended St. Mary’s Catholic grade school and graduated from Albia High School in 1965. He went on to attend St. Ambrose College and graduated with a bachelor’s degree in business. He made life-long friends in college, many of whom he was still very close with and gave him the nickname “Karp”. He also met his wife, Sue, of 51 years while in college.

Bill and Sue had 3 daughters; Sara, Jenny and Becky. He was a very hands-on dad who coached sports, helped with homework, gave driving lessons and who always had a smile for his girls. He gave the best advice and was always so willing to talk anything through with them, even after they were grown. He was, however, not known for being a “handyman”. He often got teased about how his “two” tools (usually a hammer and screwdriver) couldn’t really fix anything around the house. He was a big “teaser” himself, though, which always gave him a good laugh.

Bill’s laugh was one of the best things about him. He would always get a kick out of hearing stories, especially from his 4 grandchildren. He was probably even more doting on them than he was on his girls. He had never missed a game, concert or event in the last 17 years. He was so proud of each of them and bragged about them to all his friends and family. He loved playing catch with them in the backyard and having silly conversations to get them to laugh. One of his favorite things to do with his family during the summer was to have a “cookout” and grill hamburgers and brats.

Bill worked in the transportation industry for over 50 years and owned his own trucking company, CTS, for many of those. He was well loved by so many work colleagues, friends and family. He loved to have people around him and was a great entertainer. Bill also loved to play golf, and time on the course with his son-in-law’s Don and Jay meant the world to him. He was also a huge Royals fan and enjoyed going to games and listening to them on the radio. He reluctantly became a Husker fan after moving to Nebraska but still loved to cheer on his “Hawks”.

He was a great listener and supporter of anyone who needed someone to talk to, and he always saw the positive in everyone. Words can’t describe how much he will be missed but knowing that he will be watching over us in heaven is very comforting.