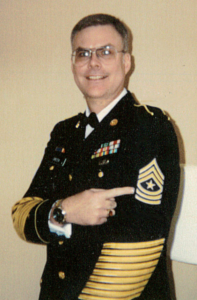 Ronald was preceded in death by his parents John Henry Greek and Dorothy Angeline Thompson Greek, his brother in law William Marshall, and nephew Matthew Marshall.

Ronald, Ronn as he preferred, was a proud graduate of North High Magnet School where he was active in ROTC. The two ‘n’s in his name is because there was another Ronald in his class at North High School that got the one ‘n’. ROTC at North lead to the Army life he truly enjoyed. After active duty he came home to enjoy college life at UNO (University of Nebraska at Omaha) and of course a fraternity plus the benefits of being a member. He joined the Army national Guard which lead to the Army Reserve from which he retired as a Sergeant Major. His military career started in 1965 and ended in 2007, which he missed every day, especially talking in the 3- letter code of Army life.

He worked his whole adult life, starting as a paper boy then bus boy at Village Inn. After working for the Douglas County Sheriff and various other jobs he ended his working career at the United States Post Office Omaha Branch. While there he was President of the Mail Handlers Union. In between all these jobs he joined the Shriners, Free Masons, Scottish Rite, DAV (Disabled American Veterans), American Legion, and other organizations too numerous to list.

Having spent his entire life in Omaha, he loved talking about the city and the changes that had taken place. In later life he loved the Omaha Royals which became the Omaha Stormchasers and was an unpaid goodwill ambassador, giving away his season tickets to anyone who asked. Ronn will be missed by the many friends he made all over the country and world. Including, the ones right here in Omaha who loved their lunches over the years.

Ronn was a great animal lover who made falling off a horse look graceful. His love for dogs and cats is also legendary, making time for them was the highlight of his day. His two current dogs missing him the whole time he was hospitalized with various stages of his illness. As Ronn would say, WOOF!

Ronn’s wife Cheryl used to warn people the Ronn was equipped with a built-in soap box. Any topic was fair game for the person he was talking with, everything from weather to politics and of course, the streets of Omaha.

So please celebrate with Cheryl, family, and friends, Ronn’s life by giving to your favorite charity or donate your time to good deeds to pay it forward.