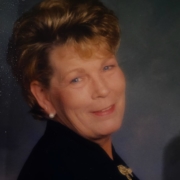 Sandy’s journey began on May 17, 1942 in Bloomington, Illinois. Sandy was homecoming queen her junior year of high school. Sandy fell in love with Melvin Jones, who was from Phoenix, AZ. Sandy and Mel ran off to get married in 1959. They had four beautiful daughters: Debbie, Lorraine, Barbara (Mike), & Casey (Rob). Melvin passed away from cancer 1972 in Phoenix and Sandy moved her daughters to Omaha and found a job at Omaha Steaks where she worked for 20 years.

Later in life, she helped her daughter manage her salon and was a second mom to many stylists. Sandy enjoyed country western dancing and spending time with her beloved family. Sandy was thrilled to have grandchildren Gary Wulff Jr., Matthew Wulff, Sr., Nikki Wulff, Justin Jones, Karisa Ciurej, Tyler Ciurej & Alec Allhijjawi. She was also proud to have five great grandchildren whom she adored as well. Sandy was a hard-working, proud woman whose strong-will and stubbornness helped her accomplish so many things in life. One of her quotes that we’ll leave you with: “The saddest thing in life is death, the happiest is birth. I’ve been blessed with a loving family and I couldn’t ask for more”. Family was absolutely everything to Sandy. Her legacy will live on in all of us. She passed away peacefully in her home on January 6, 2021 in Omaha, NE.

Celebration of Life will be announced later.