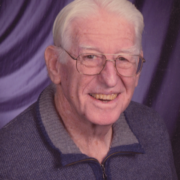 After a long, rich, and loving life, Bob Corry passed away on Monday, September 30, 2019 at the age of 86. Born on August 30, 1933 to Anna Gerdine (Brown) Corry and Theodore Herd Corry in Davenport IA, Bob is survived by his wife, Bette D Corry and children, David R Corry (Virginia), Thomas B Corry (Shelley), Timothy J Corry (Jill), Cathy R (Corry) Sutherland (John), and Michael A Corry. He was also blessed with twelve grandchildren, and five great-grandchildren. After graduating from Davenport HS in 1952, Bob began a long and productive career at Northwestern Bell, starting with a tool belt, hard hat, and climbing telephone poles, and finishing 32 years later as a Training Manager in Omaha NE.  Bob also took time early in his career to serve his country by joining the Iowa National Guard from 1957 to 1963. During his service he earned the prestigious Carlton K. Smith Leadership Award in 1961. However, it wasn’t until he retired that Bob turned his focus to the real reason we believe he was here – to help people. Working for the American Red Cross, Bob donated over 33 gallons of blood, an accomplishment he was very proud of.  Because of his unfailing commitment to the organization, the family is asking that all memorial gifts be made to the American Red Cross in the name of Robert T. Corry. Not surprisingly, Bob was active in many other community organizations as well. The years he spent as a Boy Scout Troop Leader helped mold the lives and character of many young men who were part of Troop 257. Bob and Bette both were active in their church, singing in the choir, playing bells, and singing with other churches in the Omaha area for the annual production of Handel’s Messiah. Bob’s contribution to the Hallelujah Chorus was always a fan and family favorite. For enjoyment Bob loved golfing, bike riding and doing crossword puzzles. But his biggest enjoyment was spending time with his family. Every year Bob looked forward to spending time with his family at the College World Series – where he was a season ticket holder for more than 50 years – and cycling in the BRAN (Bike Ride Across Nebraska). Relatives and friends are invited to a Viewing, hosted by Bob’s family at the Roeder Mortuary, 2727 N 108th Street, Omaha NE 68164 from 5:00-7:00pm on Thursday, October 3, 2019 . This will be followed by a Service celebrating Bob’s life on Friday morning October 4, 2019 at 10:00am at the Presbyterian Church of the Master, 10710 Corby Cir, Omaha, NE 68134. After which the family invites everyone to attend a luncheon served at the church.