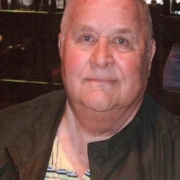 Robert Arthur Pierson was born 19 January 1939 in Omaha, NE. He was the youngest of the three children of Arthur and Laura Pierson. He graduated from South High School in 1956. He joined the United States Air Force on 1 March 1957, being one of the first to enlist at Offutt AFB. His first duty station was a microwave radio site in Elkhorn, NE. While in the USAF, Robert worked in radio communications which took him around the world, including tours in Vietnam during the war.

Robert married Hiroko Koga on 29 June 1969 while stationed in Itezuke, Japan. They raised their family in various countries and states until Robert’s retirement from the USAF on 1 April 1987. The family returned home to Omaha, where Robert attended ITT technical college. After graduation, Robert was integral to the startup of Union Pacific’s Harriman Dispatch Center. Robert’s final retirement, from Union Pacific, was in 2004.

Robert and Hiroko enjoyed their retirement years traveling around the US and to Japan.

He will be remembered for his dedication to his country, love of his family and ice cream.