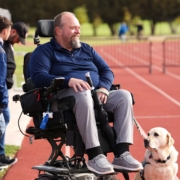 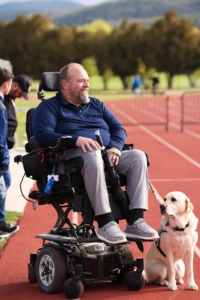 Murdock – Randall (Randy) Lee Marlatt was born June 12, 1968 in Grand Island, Nebraska to Curtis and  Jeanette (Cornelius) Marlatt. Randy graduated from Aurora High School, Aurora, Nebraska in  1986. He then attended Kearney State College where he graduated with a Bachelor of Science in Criminal Justice. While at Kearney he played on the Offensive Line for the Lopers football team.

After graduation, he worked as a Corrections Officer at the Lancaster County Jail in Lincoln.  It was in Lincoln where he met his future wife, Susan Lempka. They were united in marriage on  June 15, 1996. They had two boys, Caleb and Tyler, and settled on an acreage in Murdock.

Randy started work as an insurance adjuster for Farmer’s Mutual in 1998 and then IMT until he was unable to work full-time due to Multiple Sclerosis. Randy enjoyed coaching his sons in little league baseball and football and continued to coach them in shot put and discus in high school. Randy continued to guide other athletes as a volunteer throwing coach at Elmwood-Murdock High School, He was active with several organizations: Lions Club, MS Forward, Ducks Unlimited, and Mines Football Booster Club.  He attended almost every Mines football game to watch his boys play. Randy’s most recent venture was making custom knives which became a popular fundraising item.

Following one of his family traditions, Randy was very passionate about hunting, which allowed him to express his love of the outdoors through the experiences  he shared with his family and friends every hunting season as well as volunteering his time to local conservation groups like Ducks Unlimited.

He always volunteered to smoke pork for fundraisers and events. In addition to his pulled pork, he made the best smoked salmon, baked beans, pepper jelly, and cinnamon rolls. He was a wizard in the kitchen, on the grill, and with any smoker nearby. The only thing that surpassed his love of cooking was the love of his family and friends. Randy was a friend to everyone he met.

Randy is survived by his wife of 25 years, Susan, and their two boys, Caleb and Tyler both of  Golden, Colorado; his father Curtis Marlatt of Aurora; father-in-law Kenneth Lempka and his  wife Lois of Lincoln; sister and brother-in-law, Teresa and Jay Otto of Omaha, twin brother and sister-in-law, Rob and Laurel Marlatt of Aurora; sister-in-law Stacy Lempka and her husband Dwight Irwin of Chicago; nephews and niece: Aaron and Ryan Marlatt, Chauncey, Eli and Carson Irwin, and Jaycee Otto; and his beloved and loyal service dog, Landon.

Randy was preceded in death by his mother, Jeanette Marlatt.