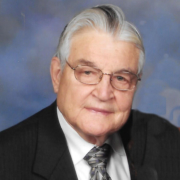 Michael Meyer Jr. was born on a farm by Humphrey Ne on a hot summer day of August 7th in the year 1933.  After his father and mother had seven daughters, they finally had their one and only son.

Mike grew up on the farm and graduated from Humphrey High School in 1951.  Shortly after his graduation he was drafted into the US Army in the summer of 1953 and served overseas in Korea for three years and four months.

After serving in the Army and getting his honorable discharge, he began his working career in Omaha.  His first job was in the construction industry, then at Roberts Dairy and then at Interstate Brands Bread Company where he worked as a driver for over 20 years.  He finished his working career at Boys Town, working there for over 12 year’s total and truly enjoyed it. After retiring, Mike and his lovely wife of over 50 years, Barbara, traveled all over the United States until she lost her battle with cancer in June of 2009.

After the loss of his longtime partner and personal life coach, Mike continued his travels with different groups in the United States, first up to the New England States then on to Alaska and north of the border to Canada.  He particularly enjoyed his time viewing Niagara Falls from a helicopter and his cruise up the Alaska coastline, he who was deathly afraid of heights and deep water. After his domestic adventures he took his travels overseas visiting Germany, Austria, Hungary, Italy, Spain and finally Paris France to name a few.

While not traveling he was seen around town volunteering his time.  The Red Cross, Knights of Columbus, Right to Life and his St. James Parish were always dear to his heart. Mike was a charter member of St. James and a member there for over 30 years.

He is survived by his only child, Mike lll who lives in southern California with his wife Julie and three sons, Michael IV, Josh and Nick.