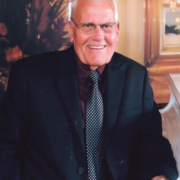 12/1/1928 – 8/28/2019
Omaha – Mervin Dean Baumann was born on December 1, 1928, to William and Anna (Lauenstein) Baumann in Sutton, NE. He was welcomed into God’s family on December 30, 1928, through the Sacrament of Holy Baptism. He was confirmed in the Lutheran faith in 1942, at Trinity Lutheran Church, Grafton, NE. He graduated from Sutton High School in 1946. During the Korean conflict, Merv spent June, 1951, through June, 1955, in the U.S. Navy, stationed most of the time at Treasure Island, California.
On August 22, 1964, Merv married Sharon Lee Becker from Stewart, MN. They farmed and made their home near Sutton. Their marriage was blessed with four children: Jon (Colleen) of Plymouth, MI; Lisa (Jeff) of Dallas, TX; David of Omaha, NE; and Amy (Matt) of Dallas, TX. A Christian education for his children was a priority in Merv and Sharon’s life.
Upon retirement in December, 1998, Merv and Sharon moved to Omaha. Church activities and a social life with many friends led to a very happy retirement. Merv and Sharon loved to travel, especially the cruising venue. Just ten days before his passing, Merv and Sharon spent five days in San Diego, celebrating their 55th wedding anniversary.
Merv was preceded in death by his parents, two sisters, and one brother. He is survived by his wife, Sharon, four children, six grandchildren (Josiah, Lynlee, Elise, Ethan, Olivia, and Jake), two sisters, and many other relatives and friends.
Mervin Dean Baumann was welcomed into his heavenly home by his Lord Jesus on August 28, 2019, at the age of 90 years, 8 months, and 27 days.