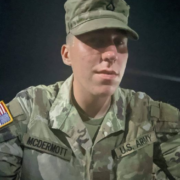 He graduated Bellevue East High School in 2017, and proudly served in the Army National Guard, graduating from boot camp in July of 2021. Liam was “that guy”. Always quick to assist, whether it was with a joke, a prank, or if your car was stuck on the side of the road. He always put family first, having had to be told to stay put to honor his grandmother’s wishes when he wanted to come home for her funeral. He had a strength we can only hope for. In the face of his diagnoses, he was always positive, reassuring concerned parents, grandparents, and family and he never gave up hope, never gave up fighting, even to the very end.

Liam was adamant that he did not want a funeral. He requested a celebration, like the big celebrations the family always did for every occasion, full of happy memories, and bad jokes. He really never was the guy for flowers, and has requested instead donations be made towards his daughter’s education.

Liam’s remains will be interred in the Omaha National Cemetery.

Donations can be made to:

Cards can be sent to Roeder Mortuary for the care of the McDermott family.