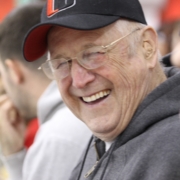 Omaha – age 84 of Omaha passed away peacefully on March 12, 2020 surrounded by his family. Larry was born to Leo and Belle Czapla on August 5, 1935 at home near Fullerton, NE.  He grew up on a farm near Fullerton and graduated from Fullerton High School in 1953.  Larry went into the Army on November 16, 1954 where he was stationed at Fort Bliss, TX.  He was discharged in the Fall of 1956.  Larry met his wife Connie Shoebotham at a polka dance in Belgrade, NE shortly after he was discharged from the Army and they were married on June 14, 1958.  They moved to Omaha in 1959 and became members of St. James Catholic Church in 1963 where they were both involved in many activities.  Larry and Connie were married for 55 years.  Larry loved being surrounded by his family and could have a conversation with anyone who wanted to visit. Larry is survived by his son Greg Czapla, his wife Cindy of Omaha; his daughter Julie Schadt, her husband Jeff and their son Alex of Lincoln, and his son Mark Czapla of Omaha. Preceded in death by his wife, Connie, his parents Leo and Belle Czapla, sisters Clara Czapla, Cecilia Zoucha and Eleanor Voichahoske and his brother Steve Czapla.