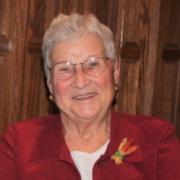 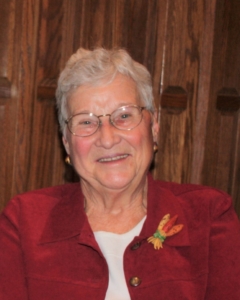 Joan M. (Jefferson) Foulk, 89, passed away peacefully on Saturday October 9, 2021 in Omaha Nebraska. She was born July 25, 1932 to Frank W. and Anna M. (Nielsen) Jefferson in Central City NE. She attended elementary school at District 18 in rural Merrick County and graduated from Central City High School at the age of 16. Joan worked at Justice Drug Store in Central City before marrying Philip Foulk on November 8, 1953. Phil and Joan moved to rural Clarks NE where they farmed and raised their 4 children. In the mid-eighties they moved back to the Central City community where Joan worked at Bethesda care center as a nurse’s aide, cooked at Merrick Manor and worked at Sack lumber. After retirement she enjoyed volunteering at the Central City thrift store. In 2016 Phil retired from Mc Ilnay Hardware store and the following January they moved to Omaha to be closer to their kids.

Joan was active in both Pierce Chapel and Central City United Methodist Church and was a member of Order of Eastern Star. She enjoyed gardening, sewing, baking her holiday cinnamon roll wreaths, dancing at the Ole’ Barn, canoeing on the Platte River and playing cards with friends.

From the minute their first grandchild was born, “Mom & Dad” transformed into “Grandma & Grandpa”. They traveled near and far to spend time with their grandchildren and great-grandchildren. They always made time for train rides, ballgames, Dairy Queen and Waffles & More. Birthdays were the perfect excuse for them to take to the road, arriving with Grandma’s famous Angel Food cake in hand.