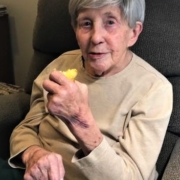 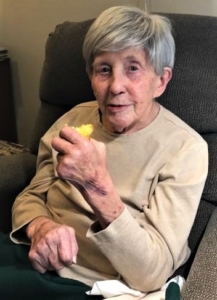 Gloria Ann Peterson was born on July 4th, 1927 to Oscar and Eleanor Rosenquist Peterson of rural Kiron, Iowa. She passed away on January 8, 2021 in Omaha, Nebraska. She graduated from Odebolt High School in 1945 and briefly continued her education at Coe College in Cedar Rapids, Iowa.  She met her husband, Norman, after she moved to Chicago, Illinois. They moved to Sioux City, Iowa in 1956, raised two daughters. She was active member of Augustana Lutheran Church. As empty nesters, Gloria and Norman retired to Bella Vista, Arkansas in 1984. Gloria continued her church involvement as a member of United Lutheran, where she retained her membership.

In 2012, physical challenges brought Gloria to Omaha to be closer to family. The final four years of Gloria’s life were spent at Immanuel Lakeside Lighthouse community. While her physical abilities declined, her wit and humor blossomed.

Gloria was preceded in death by her parents and husband. She is survived by her daughters, Kristine Peterson (Steven Schmidt), of Havertown, Pennsylvania and Kim Coleman (Paul), of Omaha, Nebraska; grandson, Peter Coleman, of Minneapolis, Minnesota; granddaughter, Sylvia Rakke (Peter), of Madison, Wisconsin.

In keeping with Covid precautions, a private service will be held for the family.

Graveside services will be conducted at Bella Vista Cemetery at later date.

Memorials are directed to The Lighthouse Community Fund.