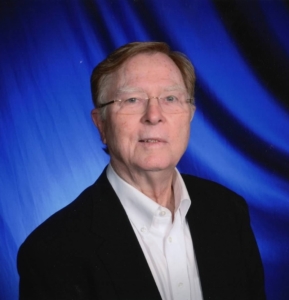 Born 8/27/1935 in Dallas, TX to Elmer Eugene Pope and Allie Gertrude Pope (Day). Attended schools in Dallas and then went to the University of Texas at Austin, graduating with a degree in Business Administration.

He worked for Sun Oil Company in Dallas before moving to Omaha, NE to work for a construction company. That company was later taken over by Peter Kiewit, and he worked for them for a short time before deciding to follow other endeavors. Pope later started selling construction equipment in Omaha and moved to San Diego, for a period, doing the same. Upon returning to Omaha, he went to work for Cummins Great Plains, a regional distributor of diesel engines. He was able to travel extensively through the Midwest, making many friends in the manufacture of heavy construction equipment. Pope was also able to travel to Europe to further sales of Cummins engines. He finally retired from Cummins in 2000, after 18 years with the company.

Pope and his wife, Claudia, of 41 years enjoyed playing golf together and decided to get closer to the game by living on a golf course. They were among the first to live on the course at Tiburon, moving there in 1993.

Pope was always involved in many activities, such as Keystone Little Leagues, where he was active on the board and served as President. When the Pope’s returned from California, he became active in the Walnut Grove HOA, helping to improve the appearance of that area. As the Pope’s moved on to Tiburon, he also became involved in the HOA there, as well, and was elected to the SID board, where he served for about 10 years and several years as President.

In Lieu of Flowers Memorials can be made to Community Covenant Church, the Shriner’s, or Nebraska Humane Society.