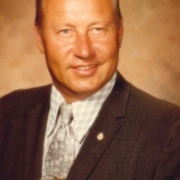 Everett “Jack” Lively was born June 8, 1926 to Everett and Edna (Jack) Lively on the family farm.  He drove his Model T to school at South High, graduating in 1944. Upon graduation he enlisted in the Army Air Corps during WWII.

In October 1947 Jack married Mary Crisp.  8 children were born to their union. The couple divorced in 1969, leaving Jack to raise his younger children.  In 1972, Jack met his lifelong love Joyce (Harder) Whitted. They married July 27, 1973. Joyce’s 3 children combined to complete the Lively home.

Upon his discharge from the Army Air Corps, Jack worked briefly for Union Pacific Railroad before beginning a 43 year career at M.U.D., becoming a construction foreman.  During these years he helped many younger people on their path. Among them were “sons” Renildo Claxton and Carl Forsman. These 3 formed a lifetime familyship. Of course during those years Jack faced obstacles, hardships, and many long days.  During these, his positive attitude made him a friend to all.

When Joyce retired Jack hitched the fifth wheel to his Dodge and their adventures began.  They toured the New England states searching for Lively, Virginia. They found it. Jack was not impressed.  Other yearly trips to Arkansas, Texas, Arizona, and all points south were throughly enjoyed. Shoulder problems made these adventures come to a halt, fortunately for the family, they came back home to Gretna.

One trip Jack always hoped for was with his sons to Alaska.  In 2004 he bought a slide in truck camper and left with his two eldest sons for 3 weeks.  Many miles driven, sights seen, beers drank, and few words spoken.

Jack’s family will be forever grateful for sharing in his life.  He walked softly, spoke kindly, and was much loved.

Rest in peace, YOU EARNED IT.