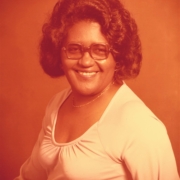 Ernestine Roland-Elliott affectionately known by some as “Gram” and to others as “Erba” was born to Clarence and Mary Lee McCray-Roland on December 1, 1933 in Wynne, Arkansas. Due to the death of her mother as an infant, she was raised by her grandparents Jim and Hattie Cribbs-McCray along with Mildred and James Horton. At the age of 13 she moved to Omaha, Nebraska and was educated in the Omaha Public School system, last attending Tech High School.

In 1951 she married Rufus Murray. Eight children were raised throughout this union. For many years she worked at Blackstone and Western Electric before pursuing her passion as an in-home child care provider. In 1972 Gram’s Daycare was established where she loved and cared for many, many, many children for over 50 years. In 1964 Gram became a member of St. Mark Baptist Church under the leadership of Rev. Marion where she served the Lord in various capacities including the Choir, Usher Board and Hospitality department. In 2017 Gram was recognized as the oldest standing member of St. Mark and in 2018 she became a member of the Mother’s board and served proudly.

In 1984 Gram married Odell Elliott and throughout this union they enjoyed fishing, traveling the country, cruising the seas and watching game shows. Gram enjoyed singing and was a part of the Soul Seekers Gospel Group. She also loved cooking and was known for her signature cornbread dressing. In her later years she loved spending time at the Adams Senior Center where she socialized and enjoyed preparing food for the other members. She continued to attend until her health began to decline.

Rose B. Tomasello
Scroll to top