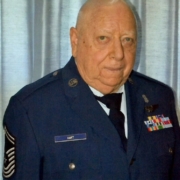 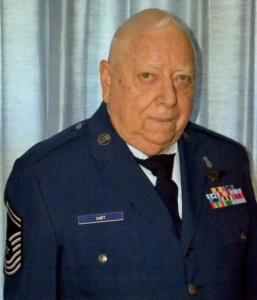 E. Darrell Hart October 1, 1929 – June 21, 2020. Born in Norfolk, NE to Edward M. and Edna Doty Hart. The family moved to Wayne, NE in 1935. Darrell had a thirst for knowledge. He graduated from Wayne High School in 1947. Darrell graduated from Wayne State College with a degree in Education. Then earned his degree in Mortuary Science while in the Army. Later he went on to earn his Master’s in Psychology and Counseling from Kearney State College and his Specialist Degree in Education from the University of Nebraska at Omaha.

In 1951 he was drafted into the Army and is a Korean War Veteran. Darrell remained in the Army Reserves and continued to serve by switching to the Air Force Reserves; he retired from the 28th Medical Squadron after 38 years of service as a Chief Master Sargent. He has been a member of the American Legion Post in Wayne NE for over 60 years and two of his children belong as well.

Darrell had a lot of interests throughout his life. He found the acreage where he and Carolyn would build what would become their favorite home for over 40 years. There they enjoyed the garden, the orchard, the animals and belonging to the Nebraska Cattlemen’s Association. He loved selling Watkins Products which he actively did for well over 30 years. Darrell was an active member of the Boy Scouts for over 70 years where he volunteered in a variety of Scouting roles and received many awards with the highest honor being the Silver Beaver. He was a volunteer firefighter in several places and a Reserve Deputy Sheriff for several years in Douglas County, NE. In 2012 Darrell and Carolyn decided it was time to retire and moved to Janesville, Wisconsin to be closer to family.

Darrell spent 42 years in Education retiring as a counselor from Ft. Calhoun High School; over the course of his career he also taught chemistry, coached football and tennis and was a School Administrator. He thoroughly enjoyed helping people and loved running into “his kids” that he counseled no matter how many years it was after they had graduated. Darrell loved music; and not only taught instrumental music and choir but volunteered as a Church Choir Director. He
sang as a soloist and in many choirs, but one of his favorite things was to sing duets with his wife of over 57 years, Carolyn.

Memorials made in lieu of flowers would be welcomed and will be directed by the family.