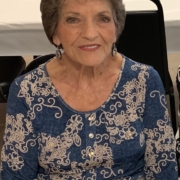 Beryldene Agnes Vachal was born September 13, 1931, in Rogers, NE, daughter of Myrl and Agnes Rhea, and passed away at the Josie Harper Hospice House in Omaha, NE on April 4th, 2021, at the age of 89 years, 6 months, and 4 days. Beryldene grew up in David City, NE and graduated with the David City Scouts, class of 1949. She loved music, especially while playing her trumpet where she was an active member of the David City Scouts Marching Band. She had a beautiful voice and was a member of the Swing Choir in her high school years. You could also find her singing some of her

favorite Patsy Cline songs around the house. She loved to garden, even if it was in a 3’ x 4’ square box where she’d plant her flowers and vegetables together and create a masterpiece. Beryldene was social with everyone she met and loved her chat time with her Trinity Courtyard community members! She was an avid reader, liked playing cards, working on crossword puzzles, baking cookies and homemade soups, her specialties were ham & bean and potato.  Beryldene was an animal lover but her cats had a special place in her heart.

Beryl was united in marriage to Richard Dennis Vachal on June 23, 1950, in David City, NE. Six children were born to this union; Shirley, Debra, Steven, Terry, Randall and Richard.

Beryldene was a stay-at-home mom until the family moved to Omaha, NE where she worked at the University Hospital in admissions and later got into various retail businesses. Eventually, Beryl moved to Columbus, NE and finished her career with Becton Dickenson working in the Quality Control department. After retiring from BD she moved back to Omaha, NE.  Omaha was home to her.

The family of Beryldene Vachal wishes to extend our most sincere thanks to all of our family and friends for their love, prayers and support and for being a part of Beryldene’s life of which we are all richly blessed!

The family request in lieu of flowers, memorials be made to the family for future designation to the Hospice House of Omaha.